'Tis the Season to be Soggy

How many of you cruisers have heard this before:

Never in our cruising lives have we seen so much rain. And we have never “caught” rain before – ever. But we are catching rain on a daily basis now! Living in the southern hemisphere means it's our summertime. And summer means torrents of rain. Torrents.
Until now, I have never looked at the Fatty Knees full of water on the fore-deck and thought of Mr. Bubble and a back-scrubby-on-a-stick at the same time. (Cruising women become desperately clever when it comes to devising a way to take a bath!) 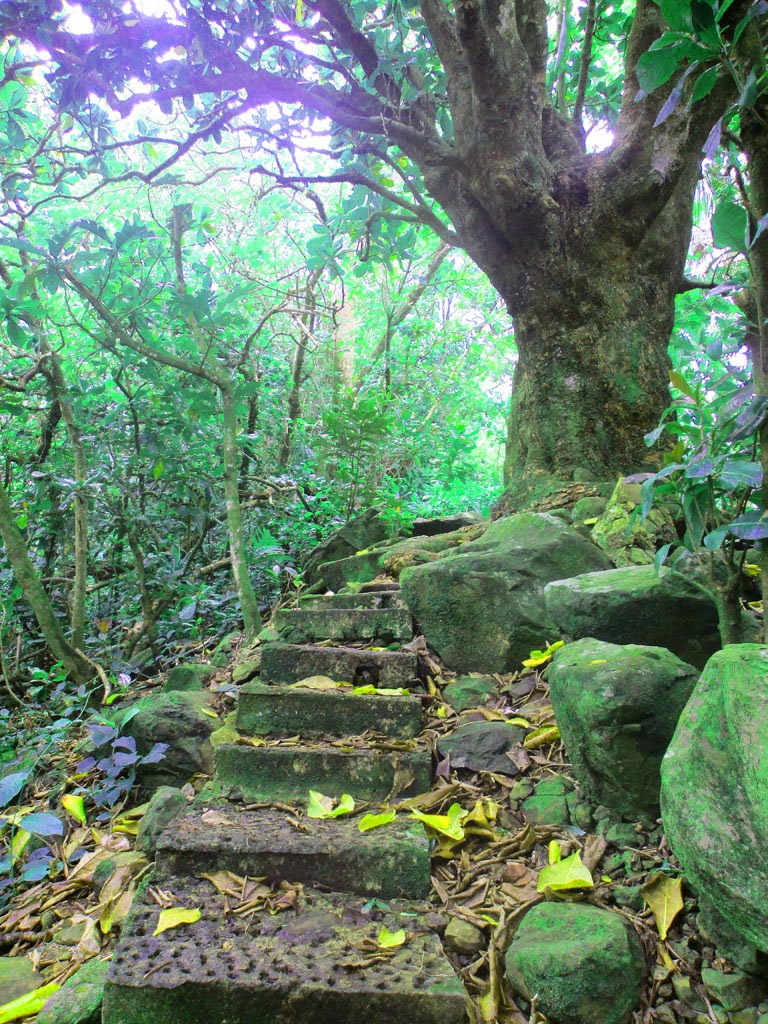 With the rain comes the rain forest. A rain forest of mold, mildew, spores and more spores. We battle the growth daily. Mildew on the cushions. Mildew on the mattresses. On the walls. On the stove. On the fans. On the ceiling. On clothing. On food. On vitamin bottles. On appliances. On electrical cords. 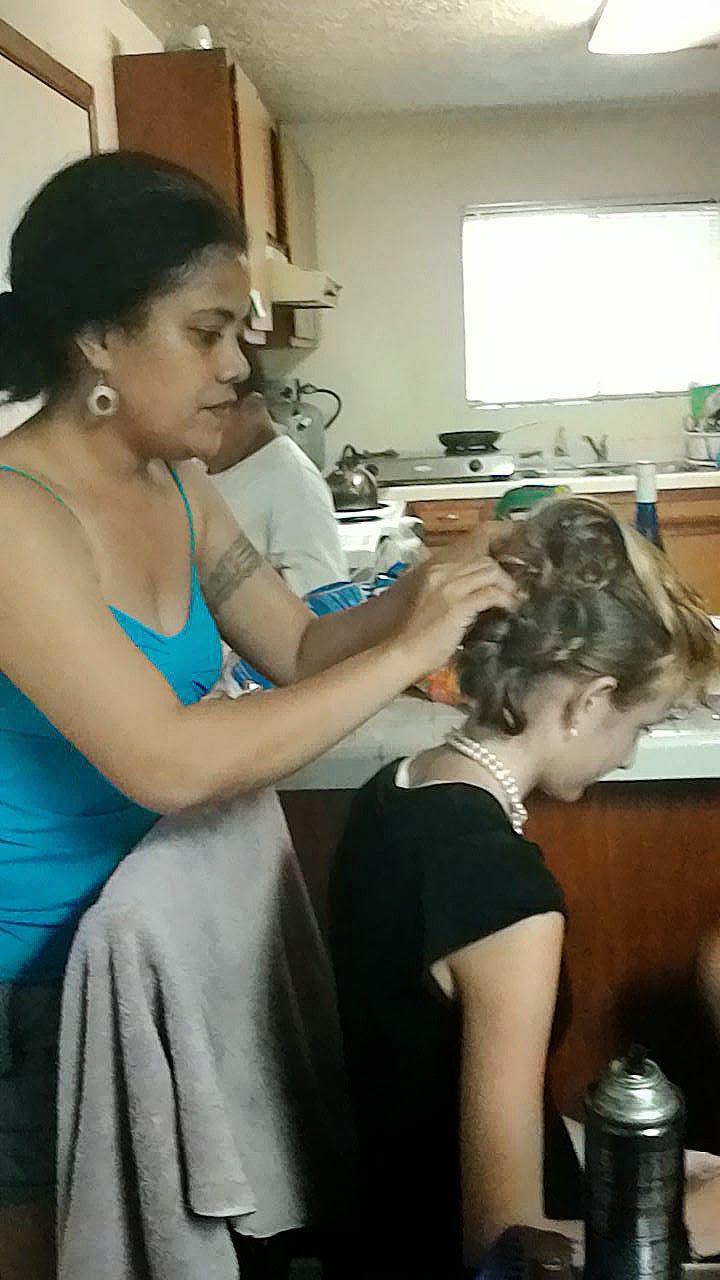 And rust. We must check canned food supplies regularly. I have found a couple cans that have been suspect of so much corrosion that the contents inside might have been botulistic. (Botulistic is not a word, apparently, but I am stuck on the boat due to torrential rain and so I am making up new words for fun.) BOTULISTIC seems like a good one.

We did not invite a colony of ants aboard, but somehow they confused “Hotspur” with “Hotel”. And insect problems are also to be expected in the tropics, so we are not surprised. However we did not expect what happened while we were enjoying sun-downers with a fellow cruiser one evening. We did not expect to be chased home by a swarm of termites that began landing on us and crawling inside our clothes and burrowing in tickley places. It was obscene. And the night Jim became mad in the head was not a fun night. It was all because of a lonely bug, playing love melodies on his wings in hopes of attracting a mate. I thought my husband had become a raging lunatic when he woke me out of my sleep in the wee hours screaming like a madman! We never did locate its hidey-hole to put us out of our misery, but by the third night the bug was much quieter – until he finally played no more. I can't decide which was more annoying - the chirping bug (which I didn't notice until Jim shared his ravings with me) or the raving mad husband. 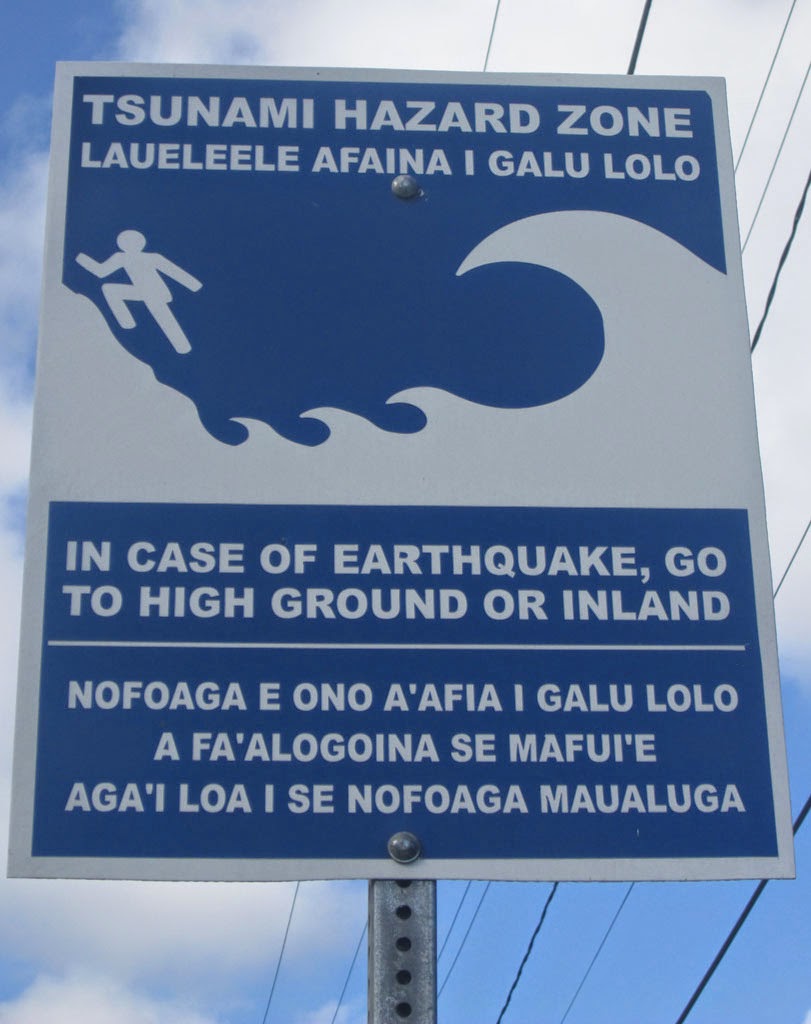 I love American Samoa for many reasons. I wish I could honestly say that American Samoa is a wonderful spot for cruisers... and if you're talking “eye candy”, then yes. But there are a few logistical facts that make cruising here a pain in the butt. From a cruiser's perspective, American Samoa could be much more accommodating. Here is a list of our discoveries. It is not rose colored... it is factual.

There are no haul out facilities in American Samoa – unless you are wealthy. We are desperate for a bottom job. It will not happen at the Ronald Reagan facility here in Pago. Last we checked, $9,000US is the cost for a 45' boat. I don't know any cruiser who would pay that to haul in/out and have some paint slapped on the bottom. The next best place to haul out is Tonga or Fiji.
And though there is a marina here, it is only for emergencies... as far as we have been able to tell. Old men who have heart problems or single-handers seem to be able to talk the marina into a spot to side-tie. There is no water and no electricity. Theft is an issue. And that is too bad because the holding in the harbor is horrid. I talked with the marina when we first arrived and was told that it is not a “long-term” marina. I was quoted $30 each day to stay there if it was an urgent matter, although the staff told me the marina would “work” with us. We declined.

The Pago Pago Yacht Club is defunct. Something to do with government interference from the governor's office. I never did get the whole story.


If you wish to leave the harbor and sail around to the other side for a few days it will cost $50US every time you “move”. And there is a monthly charge to anchor here... we have no idea how much it will really cost when we plan to leave (the hidden charges aren't published), but there are several stories of those sailors who sneaked out in the middle of the night to avoid "taxation". 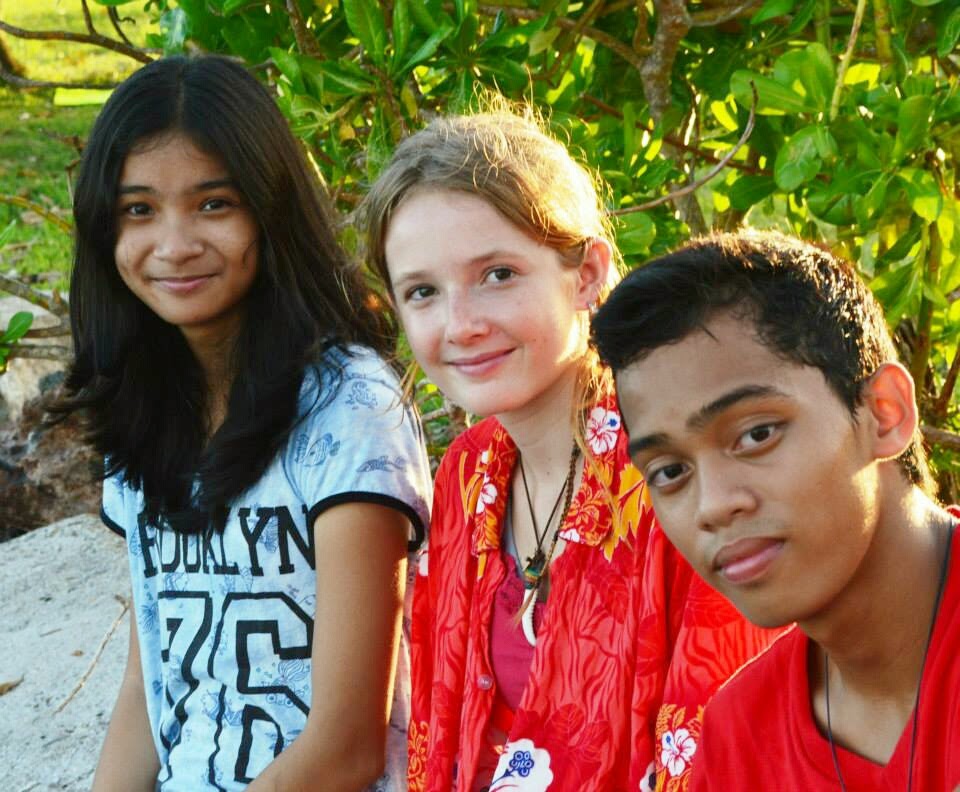 Samoan food is not our favorite. (In fairness to the culture, I feel I have not had good examples and my desire is to gather a group of friends together for lessons in cooking and tasting.) But this has been our not so scrumptious experience:
Greasy pork or corned beef wrapped in taro leaves baked to death in an “umu” and swimming in fat...
Breadfruit and taro baked into dehydrated, gray lumps...
Coco Rice... rice cooked in coconut milk and ground cocoa beans with lots of sugar ... (apparently, we are the only ones who do not appreciate this interesting combo) and I have been told by a Samoan friend that eating it with bread and butter is the key. I may have to give it another shot.
Varieties of plantain served as a side dish – cut in slices... dry, tasteless and starchy.
Lots of breads and sugary starches, including a "pancake" that is a sugary ball of dough fried in fat. (I must say that I DO like this pancake, however, I just can't eat food like that anymore if I wish to stay nimble and fit through the hatch!)
Restaurants are spendy and most of them are mediocre. Jim and I had a wonderful meal for our anniversary at the Sadie Thompson Inn – one of the best meals in a long time. We had 2 glasses of wine each and an entree and nothing else and it cost $100.


And for the most disappointing fact about cruising in American Samoa...
the internet is horrendous. It is expensive and is terribly slow. It makes working from here remotely very difficult indeed. We pay $50 each month for internet that functions well enough to send emails – most of the time. To maintain his websites, Jim must spend an additional $60 – only 4 gigs a month – which could easily be burned on Youtube videos in one day. The US has poured anywhere from $95 million to $200 million for the internet here on the island and it is slower than anywhere in Mexico we have ever been. Taxpayer's money pours in, but no one can tell you exactly where it goes. It seems to simply evaporate.
What American Samoa IS good for if you are a cruiser is that it is the most affordable place to ship things in and out to the States in the South Pacific. We bought and received out Raymarine chart plotter from Florida shipped here quickly and easily. We have purchased items online, shipped them to family or friends (who box these little things up in one box) and then have had that box shipped to the main post office in Pago Pago marked “General Delivery”. It's been wonderful.

US food items are plentiful here on island. Dried cranberries, flax seed, couscous, gluten free products, canned veggies and fruit, oatmeal, canned chicken and corned beef... and food cost is much lower than in French Polynesia. And yes – beer, wine and spirits are available and reasonably priced. American Samoa is a fabulous place to stock up on food. 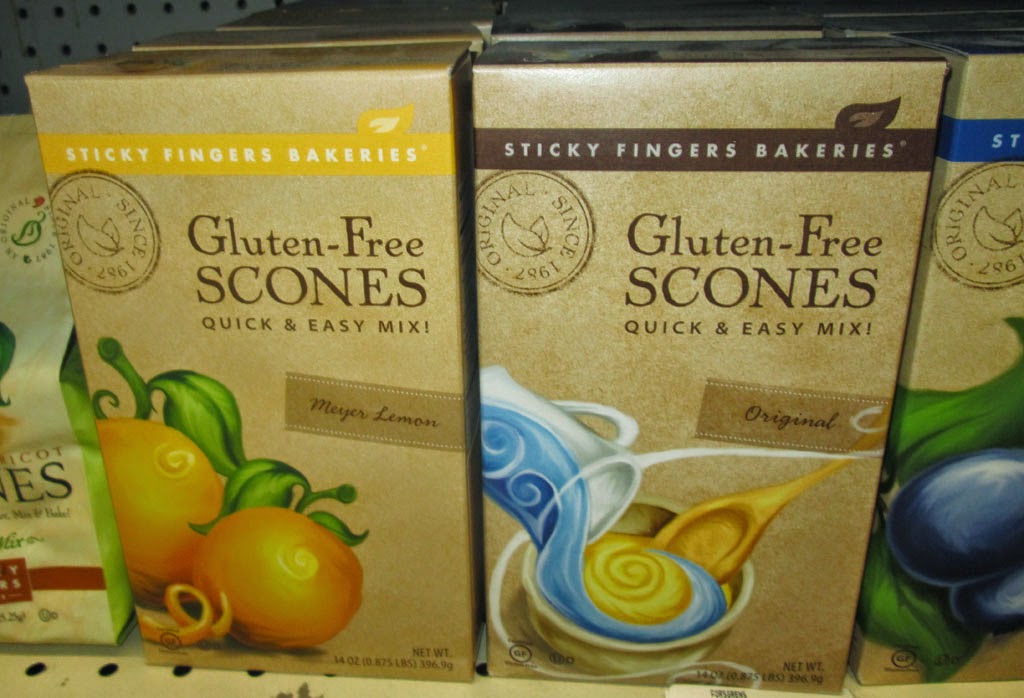 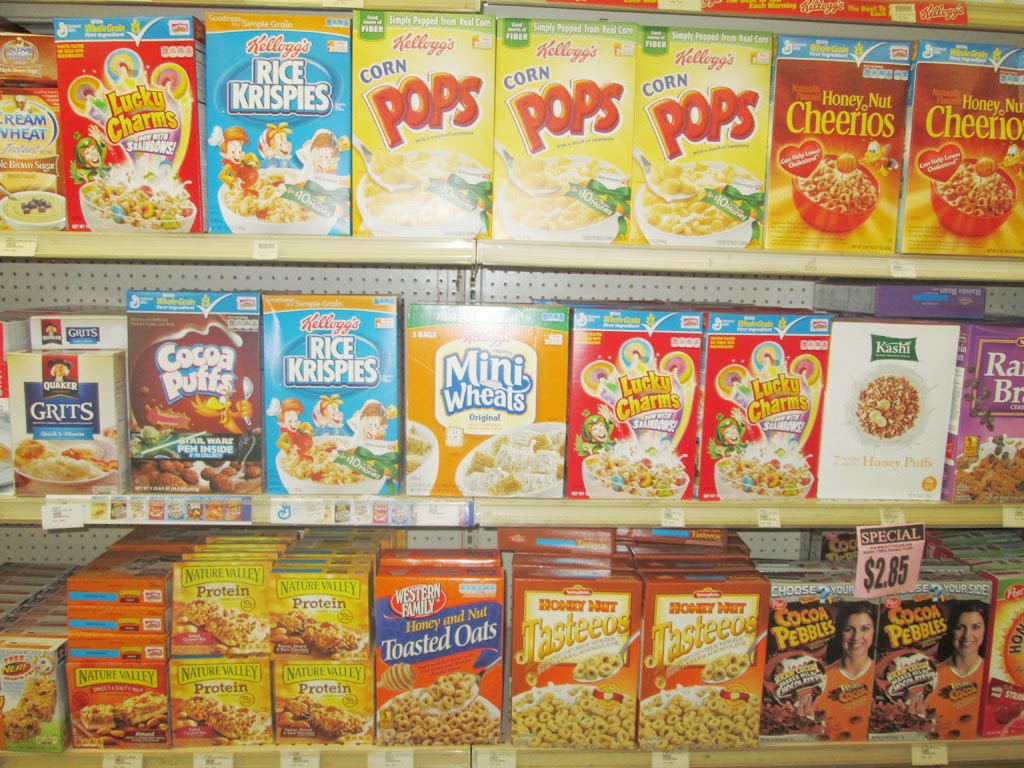 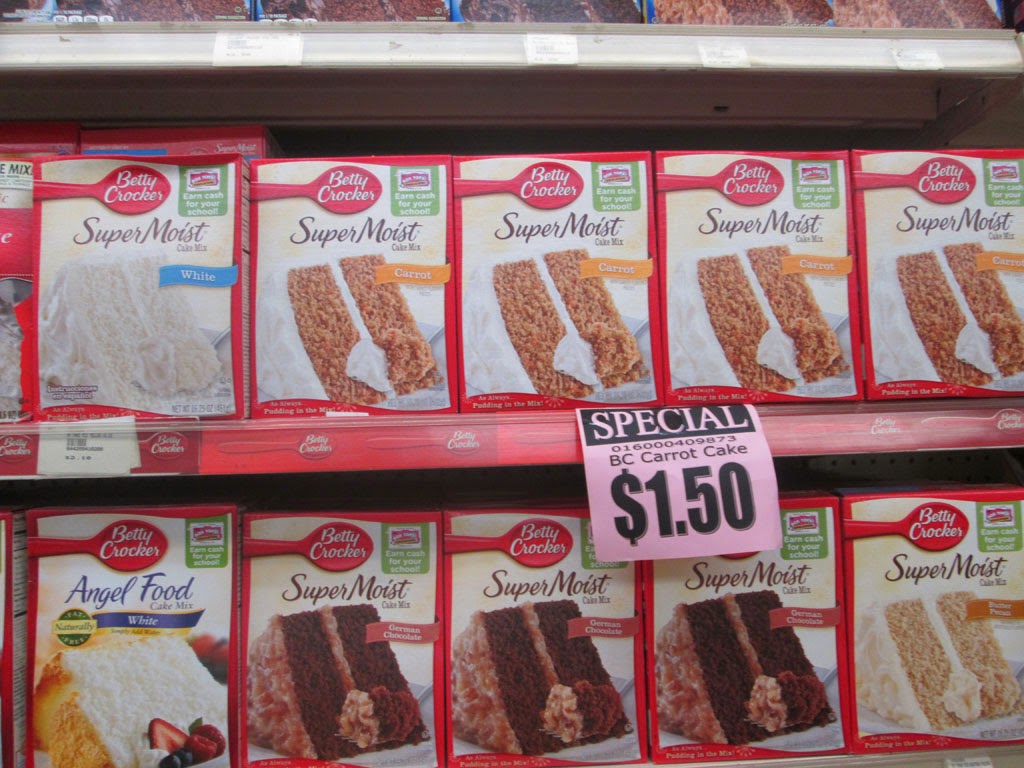 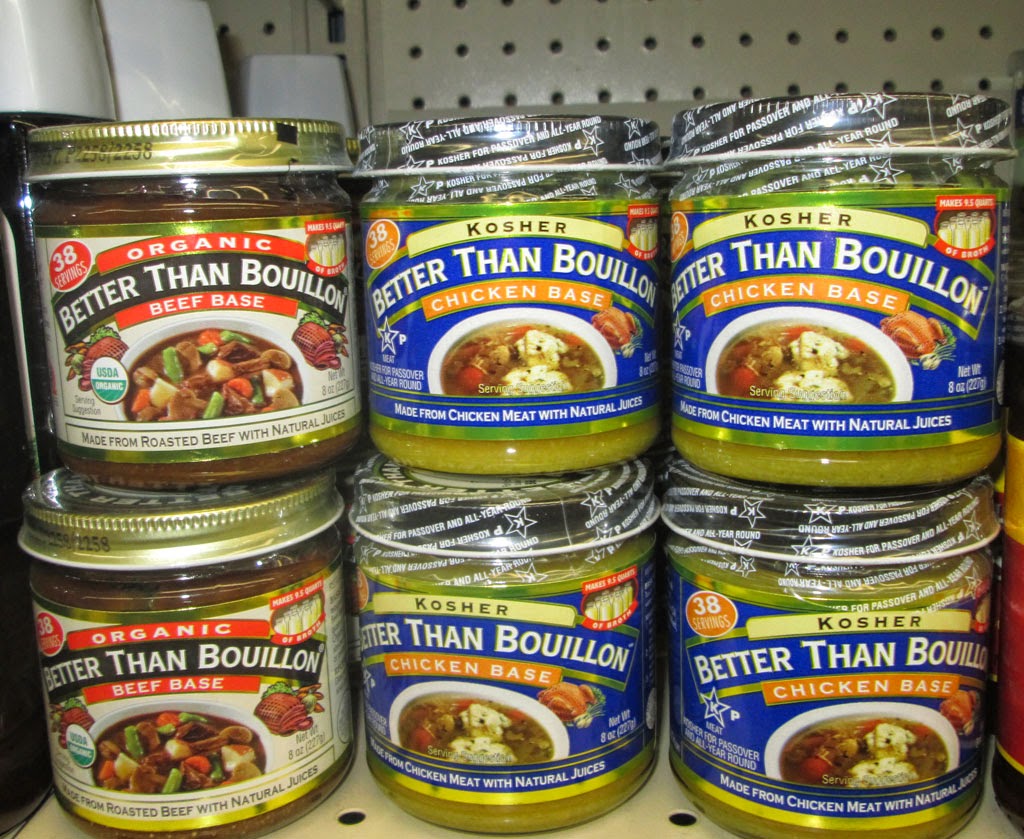 Getting around on the island is easy. The bus system works pretty well. The cost for adults is $1. Kids ride for 25 cents. But, the buses quit running around 5:30pm and on Sunday they don't run at all. It's not the end of the world if you take the bus with a stop... or even two. But any more than that and those dollars begin to add up. The buses are small and many times crowded. Going out for dinner on the other side of the island or a night at the movies isn't feasible because it's too far to walk. There are taxis you can take – but they have been known to charge a hefty fee based on your derivation.

Propane is not close to the harbor, but the buses will take you there with your tanks. Trash receptacles are near the dinghy docks. There are 2 dinghy docks: the marina allows cruisers to tie up in a slip and there is another dock at the end of the harbor closer to a nearby laundry facility. 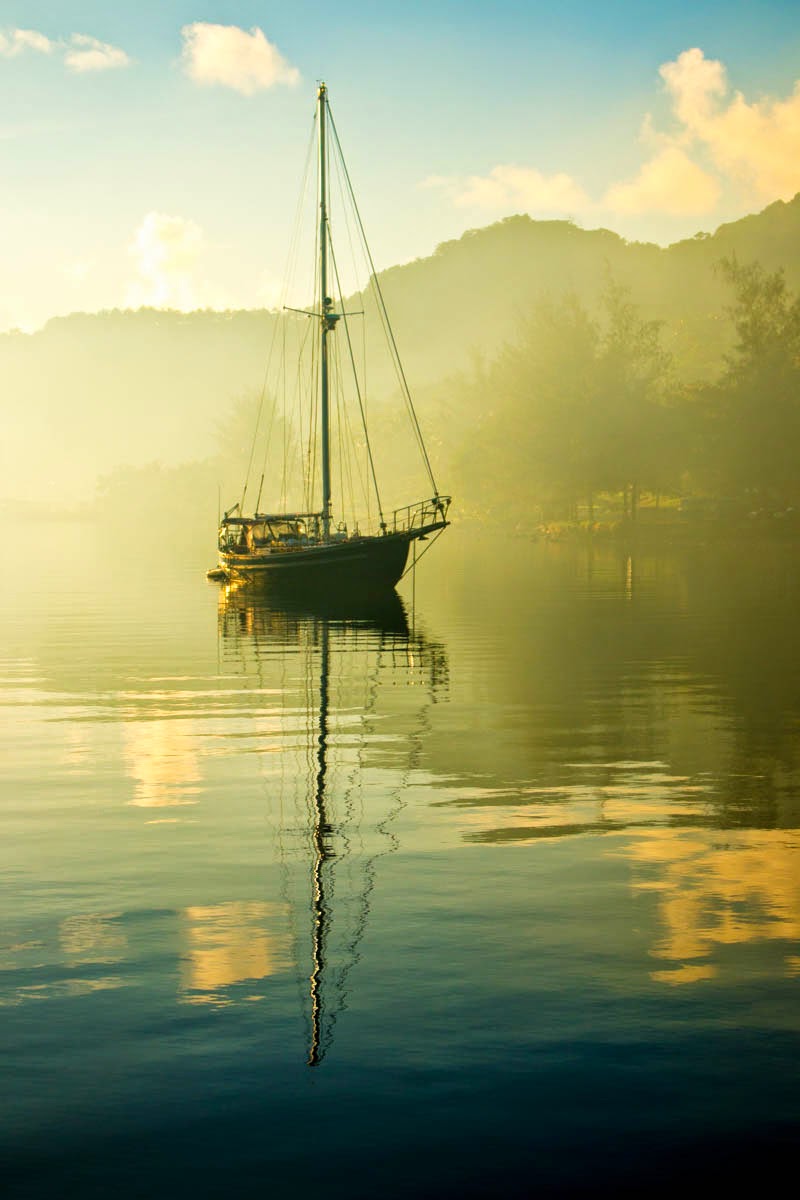 There is so much potential here for the island to make a small fortune off cruisers or on tourism, but as one local person told me, “The US has spoiled the people here”. And that is sadly true. Why get an education or work hard towards making your own money or growing your own food when the federal government hands out food stamps and federal grants like party favors? Obesity is rampant. Diabetes is slowly rotting away at the culture – one limb at a time. Alcoholism is the main reason there is any crime at all. As Jim so aptly put it, American Samoa is just a glorified, tropical Indian Reservation... minus the casinos.

But it is paradise, nonetheless. And as long as the US keeps the influx of money coming there are jobs – even for cruisers. The hospital needs doctors and nurses. The schools need qualified teachers. The tuna boats need licensed helicopter pilots. There is one Starkist plant remaining on the island - the others left when minimum wage increased. Almost everyone here is from somewhere else. And the people... the people are wonderful and kind. We do love American Samoa despite the fact that it's cruiser limited. We think we'd love it even more, however, if we just weren't living on a boat. 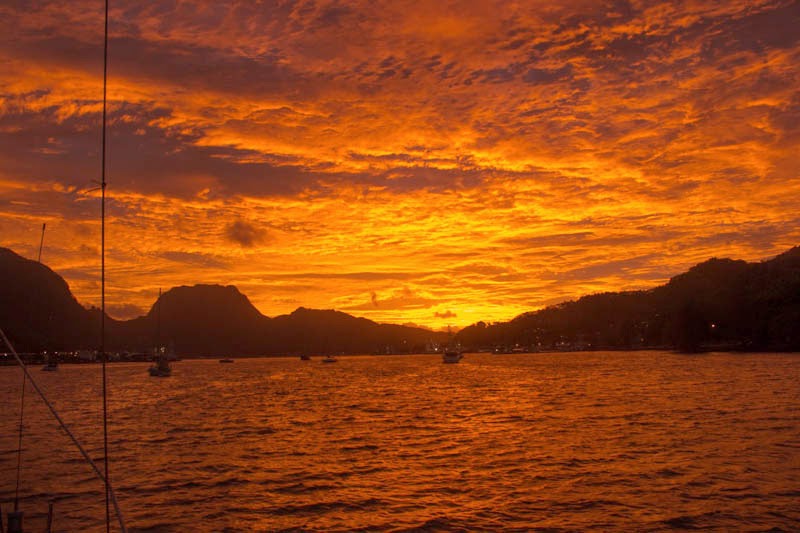