Smoking Aboard in La Paz, Mexico

I've brought you up to speed with the kids over the past year. Now for the parents.

Jim has always kept busy with the various websites he hosts, like his How To Fold Paper Airplanes site. Keeping up to date with Google changes and upgrades is a busy job. Living in La Paz and having fully accessible internet on the boat 24-7 is a valuable bonus.

And boat projects... I could rattle off a list but every cruiser knows the list just goes on and on. Although Hotspur is looking quite dapper now that her gaping holes have been patched and painted. Roll and tip method... worked like a charm and a fraction of the cost - and done in the water. I'll post more about that sometime down the wave.

On a personal interest note, Jim delved into an area this past year that has long peaked his interest: Sausage making and smoking meat.
Living on a boat and having food storage concerns might be a logical reason to have interest in this area. Maybe it is Jim's Polish and German background - or maybe it because we have had a heck of a time finding decent smoked meat in Mexico. Perhaps it is in preparation for our future voyage wherever... that preserved foods are so much more convenient when you are sailing long distances and have limited or no refrigeration. But no matter. I am blown away! My husband's sausage rocks! (Yes, I know -  I'm opening myself up to juvenile humor in the form of sausage jokes) But his bratwurst and hot, red spicy knockwurst are absolutely fantastic. His Italian and Breakfast sausage would give Jimmy Dean a run for his money. I swear - the man has tapped into a valuable niche market! 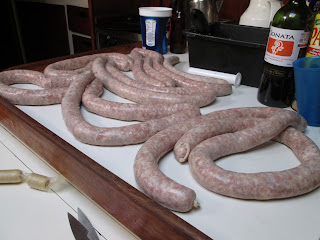 Jim reminded me of the Little Professor when he began down this road and built his very own trashcan smoker - a smoker made out of an new trash can and utilizing an electric hot plate as its heat source. Yes, I know - he could have gone out and bought a smoker... but where, pray tell,  is the fun in THAT?

A few months after playing with his trashcan and having successful results, things began to get serious. Jim got rid of the hand grinder and ordered an electric industrial sausage grinder with a variety of cutting blades and a sausage stuffer. As word got around that Jim was a serious smoker, an informant gave Jim a tip-  a Bradley Original Electric Smoker (never used) awaited him at one of the Segundas (Mexico's word for a Second Hand store). For a mere $50US. Jim began smoking daily.


Succulent hickory chicken breast, mesquite pork chops, oaky beef ribs and whole roasted chicken -
even the catch of the day... marlin steaks. Well, somebody else's catch of the day and when word got out that Jim was smoking meat the fishermen just appeared.

I don't know if this is a potential money maker for us or not. We sure are enjoying the end results, though. Don't ask what is going to happen to the electric smoker once we pull away from the marina - I really don't know. But I can guarantee that Jim and his smokin' hot charcuterie talent will have our larder overflowing with salt cured and smoky goodness!

With Tim off to study in the States, we are down to only one baby bird in the nest. And she quickly took over the larger lower bunk that her brother left behind. I, on the other hand, quickly discovered we have SO much more storage space with the top bunk now vacant!! Yay for me!
Carolyne is now completely proficient in Spanish - a huge accomplishment since she spoke virtually not one Spanish sentence upon arriving to her first day of Mexican school last August. Yes, we had Spanish Studies in both kid's home school program, but it was a total disaster in Carolyne's case. She simply refused to learn it and made Spanish learning an agonizing chore. I finally gave up - threw my hands in the air and said to her in my best Jewish mother accent, "Fine. Fine! You want to be a ignoramus with no hope for the future for the rest of your life? Fine! I'm not going to kill myself. I'm not going to kill myself inside and out trying to teach you Spanish. Instead, you are going to help me with my Spanish and everyday we are going to study my flashcards." It sort of went better after that. Sort of.

Going to an all Spanish speaking school changed things for Carolyne. She didn't have a choice anymore - she had to learn the language. And I can attest, this was a far better venue than me trying to teach her. For both of us!

I wish I could say that Carolyne has made long, lasting friendships - but it would be a lie. Although the local children have been loving and kind to her, Carolyne does feel like an outsider. Whether it is partially her personality or whether she just doesn't feel that she fits in, she has only made one really good friend, her teacher's daughter, Cris... who speaks some English.
And in a few weeks Carolyne will be starting school again for the interim. Secondary will be much more demanding than Primary and she will have many subjects to juggle. But she is a smart girl and Jim and I feel she needs to continue with her language studies. She is very good that way. And I don't have to be the one who teaches her. In fact, now she corrects me... and I love it!