Invited to a Hindu Temple and Ganesha Feast

When a local repairman here in Savusavu phoned Jim to invite us to attend the Ganesha ceremony at the Hindu Temple, we were eager. "Don't eat meat on Saturday or Sunday," Pallay instructed. I thought for sure Jim would balk. I made him Eggplant Parmesan once for dinner and he complained for a month that the meatless meal bordered on starvation. But for Pallay, Jim agreed. This was the last day of the 10 day festival of Ganesha Chaturthi.

I call Pallay a repairman because that's how we met him. Our big alternator gave us grief and fixing it was cheaper than buying a new alternator. But really, Pallay is Jim's friend. He's given Jim a tour of the town and showed him locations where to buy certain things. His rates have been more than fair and he's not charged us more for extra work. He's come to Hotspur several times to diagnose our alternator's behavior. 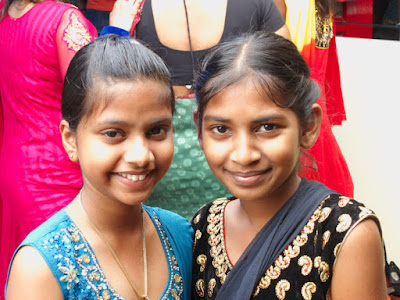 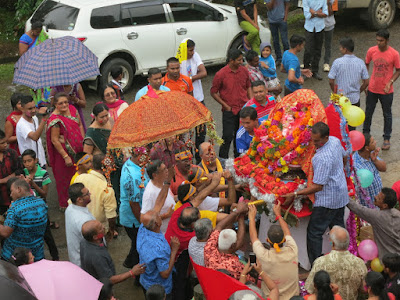 It was disappointing that on Sunday it rained, but that didn't stop the horde of Hindus from showing up to the small temple to worship. We could hear the bells clanging in town before we walked up the steep, paved road and multi-level steps. We trudged through mud to get to the door. 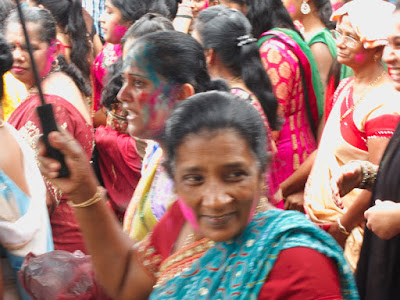 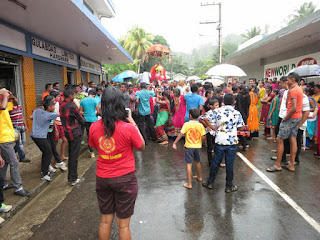 Men tended a celebratory fire pit outside and we removed our shoes. Women and little girls dressed in their finest saris sat on woven mats on the floor. A narrow path led to the Ganesha. Flower wreaths and food offerings brightened the altar. The second we walked in I began coughing from the rolling clouds of incense. The open windows helped a bit. We paid our respects to the altar by rotating a silver platter with candles, incense and marigolds around the deity several times and took a seat in the back on the floor. 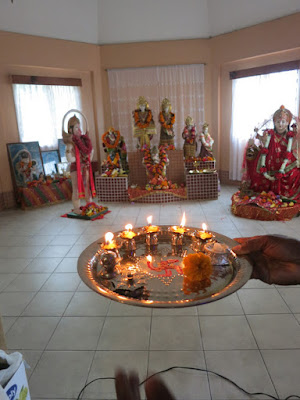 How these old women could sit cross-legged for hours on the hard cement was unfathomable. My legs began to buzz with numbness and I shifted uncomfortably. It took my mind off it when the boys on a stage began singing, playing the harmonium, drums and cymbals. Women got up and danced, long costume earrings and bangles jangling with their hip shakes. Some threw rice at the Ganesha. It was hard not to jump up and join the dancing women, but my daughter's "don't do it" glare kept  me rooted to the hard, uncomfortable floor. 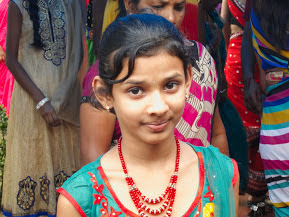 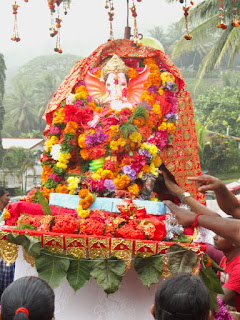 Pallay escorted us outdoors a couple hours later where we were served food. The men served sweets like rice pudding and groundnut laddoos (a crumbly cookie). There was also a pasty, sweet dish with raisins and coconut. Everyone ate with their hands. Later we had lunch, a vegetarian delight. 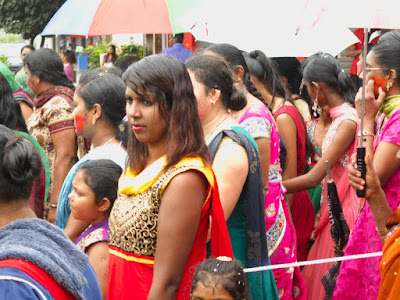 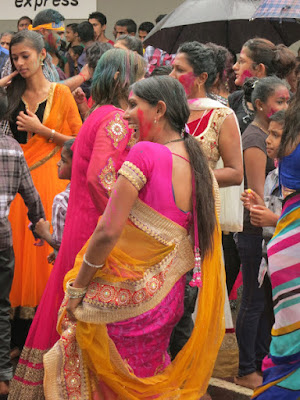 Strong men loaded the Ganesha on a palanquin and the crowd followed him through town. Colored powders in pink, blue, green and orange were tossed into the mass of colorful people or rubbed on faces, hair and clothing.  People danced in the streets, sang and chanted. MORYA! It was quite the spectacle as Ganesha was taken to the ocean and released into the water, taking the misfortunes of mankind with him. 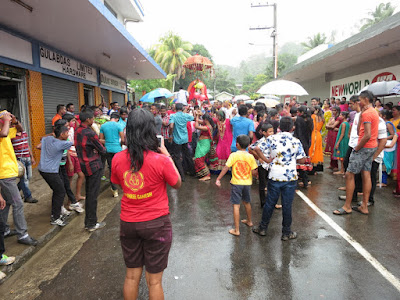 Posted by hotspur at 1:27 PM No comments:


It's not often that "The Biggin" comes around, although all of the annuals from now on will be great big "Biggins". And, I rarely celebrate my birthday but with my kids and husband and an occasional sister every 10 years.
But 50?
In Fiji?
How absolutely fantastic!

We gather for dinner at the Captain's Table, a fancy-ish restaurant at the Copra Shed Marina in Savusavu. It's the kind of restaurant where gently scented, steaming towelettes are rolled like scrolls on small white plates and individually set at the edge of each place mat. A delicate sandalwood fragrance curls up from the cotton rolls.

(If I hadn't already taken a shower and put on minimal makeup I would have sponge-bathed right there at the table. I'm relieved to discover my initiation into the "Golden Years of Happiness" hasn't changed the fact you still can't take me anywhere.)


We all powwow at Windcutter after dinner for cake and ice cream and wine.
(Like I needed any more cake... Still, what a wonderful way to roll into the 50's.) 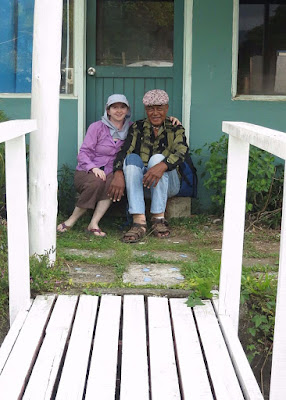 My new friend, Sailosi, surprised me with a beautiful card. 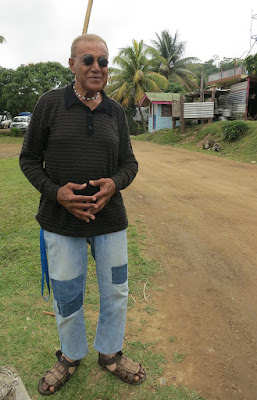 I met Sailosi when trying to book the sugar cane mill tour. I've run into him repeatedly for weeks since. And I was deeply touched by his sweet words. 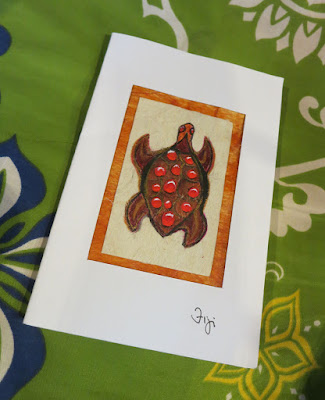 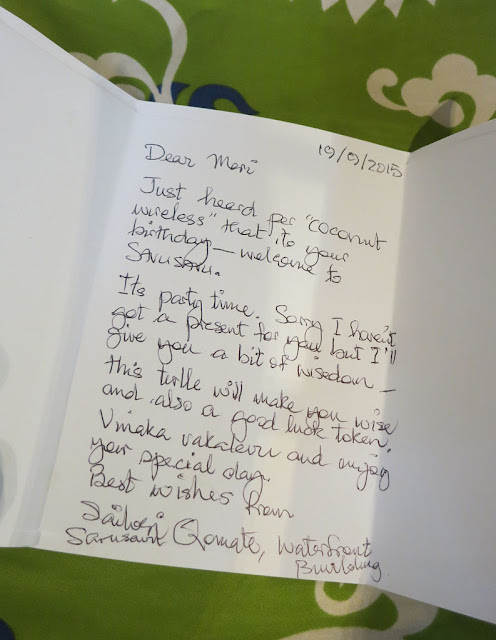 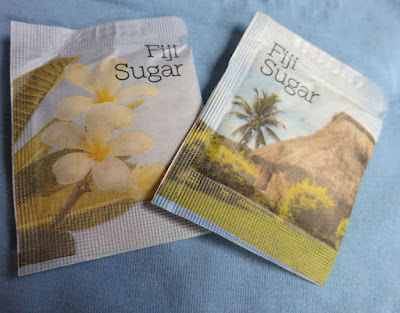 I felt really pressed to take a tour of the Fiji Sugar Corporation mill before they closed for the season. We made three trips to Labasa before we scored a tour. We took a trip with our cruising friends, Dave and Wendy on sv Elysium.

Lines of sugar cane trucks and tractors waited to be admitted to the dumping station. Some had been waiting for hours and were eager for the opportunity to chat with us.

It surprised us all that this third world country has a cogeneration mill. We learned the sugar cane is crushed, the juice extracted and routed to the steam boiler. The fiber from the stalk is dried and turned into "baguesse", or fuel material. The baguesse is burned to power the steam boilers. It's not only completely self sustaining, but the mill sells its leftover energy to the power company.


The mud squeezed from the cane stalks is sold as fertilizer. Molasses is not only bottled and sold as syrup, but farmers use it to fatten livestock. 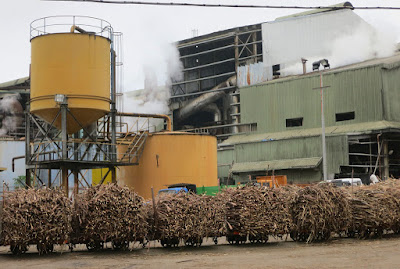 Employees are an investment, chosen at young ages for apprenticeships. They work up the ranks and their education is funded by the company if they are dedicated.

A Taste of Hidden Paradise

My stomach rumbles thinking of The Taste of Hidden Paradise Restaurant. We discovered Savusavu's little gem of a diner while eating lunch in Labasa at the Banana Leaf. We mentioned to the owner that we were on a sailboat in Savusavu and he said,”If you are from Savusavu, then you must visit my sister's restaurant there. It is very good.” Maybe he is a little biased, but we agreed to give it a try.

We've eaten there 5 times - and we would have visited more had we known it existed. The Thai Chicken is a beautiful curry dish - creamy and mild spicy with plenty of broth to spoon over your bowl of rice. Chicken Black Bean tastes savory with its coating of rich black bean sauce and faint trace of fresh ginger. The lamb curry is one of my favorite dishes- served with rice, dahl, roti, a veggie side dish of the day and tasty homemade chutney. Fish in coconut milk, spicy prawns, lamb chops...the menu is broad. Jim and Carolyne agree. This is our favorite restaurant.

There's no liquor license – but don't fear! It's okay to brownbag. Bring your bottle of wine or cold beer with you.
Because every plate is made to order, it can take a while to prepare. Impatience will spoil your experience – and trust me... it is worth waiting for! If you want something to tide you over, then order some of their pre-cooked foods from the case in the front.

Arunesh and Reshma are the owners. Lovely people - eager to please and proud of their family business.

Excellent food. We don't leave feeling hungry. It feels good knowing we're supporting a nice, nice family. We can eat there more frequently because the prices are so reasonable = less time in the galley cooking. Need I say more?

Posted by hotspur at 1:42 PM No comments: