Sailor Attacked While at Anchor

Jim Van Cleve is a personal friend. At 11pm on the night of January 25, 2017, the single-hander was boarded in Suva, Fiji by 2 armed men and attacked with a cane knife (a small version of a machete). He defended himself, but received severe lacerations to both hands and had to be hospitalized for days. The prognosis was grim - Jim might lose a hand. After surgery, doctors felt positive they'd saved Jim's hand, but he might lose his thumb which was almost severed completely.

We spent a year with Jim sharing the same anchorage. I wrote this story about him last year after Tropical Cyclone Winston hit Savusavu, Fiji. There were a handful of people who managed to save their boat - Jim was one. I can't find my photos of Jim, but I have some he sent me, which I've posted.

We've set up a fundraiser for Jim through GoFundMe to help him with medical bills and physical therapy. We don't know what nerve damage he has or if he'll ever have full use of his hands. He's lucky to be alive. 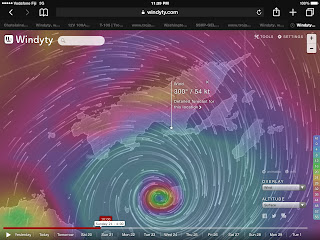 When Louisiana native Jim Van Cleve heard Tropical Cyclone Winston was making fast tracks to Savusavu, Fiji this past February, the sailor prepped his Pearson-35 sailboat for the onslaught. Weather gurus predicted the super-storm would hit Vanua Levu, Fiji's second largest island, late at night. But, the Category Five cyclone accosted Savusavu in a sneak attack, pummeling the anchorage before noon. Minutes before power lines toppled, snapped and severed communications, Van Cleve chatted on Facebook and posted photos of the escalating weather conditions from his cockpit. Concerned, his friends sent warnings:
"There's still time to get off the boat before it's too late."
"Nothing you can do on the boat, except possibly hurt yourself."
"Get to shore, Brother." 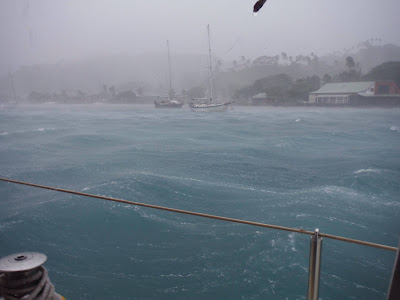 And then, nothing more. Widespread blackouts and power outages cut off communications all over Fiji. No one would know for days afterward if Van Cleve and his boat, Kalokalo, survived.
Though well-meaning friends felt it was foolish for Van Cleve to stay aboard his vessel during a cyclone, the high-spirited single-hander had no intention of abandoning his boat. "I've been sailing for many years," he says, "and this isn't the first cyclone I've encountered." But, what Van Cleve didn't realize was that Tropical Cyclone Winston would put his vessel to an intense test, along with his capabilities and stamina. He would find himself up a real creek. And, no paddle anywhere in the South Pacific would do him any good.

Winston attacked. The wind screamed, hurling rain like sharp arrows. Van Cleve lashed himself on deck and wedged his body in the companionway as his boat jerked and pitched on its mooring. Then, a clamorous banging reverberated forward and he stumbled into the violent motion of the cockpit. "It was the catamaran in front of me. It's roller furling headsail broke loose and was flogging," he says. The 46-foot cat appeared almost on top of him. With the added windage, the load was too much. The mooring chain snapped and the large cat yanked free from its tenuous grasp. It shrieked past Kalokalo, missing it by 20 feet. Van Cleve thought to grab the VHF and warn the fleet behind him of the oncoming danger, but the cyclone's deafening roar thwarted all verbal communications. 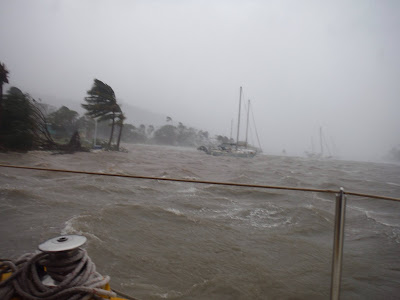 Conditions worsened. The two boats anchored next to Kalokalo faded in a thick, white fog. Kalokalo strained at its mooring block, swinging wildly. Van Cleve worried his vessel might also break free as the bow thrashed and heaved, so he made a bold decision. He crawled slowly forward, grasping tightly onto handholds each time Kalokalo tried to buck him overboard. He reached his storm anchor, tossing it over the toe rail and into the churning water next to his mooring. Then, he sidled up to his windlass and dropped 100 feet of chain overboard. "What made it even more difficult is that I had to keep my eyes closed," he says. "The rain on deck was so brutal it felt like pelting glass. I didn't want my corneas damaged." 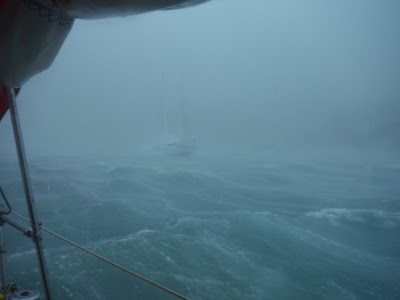 Van Cleve inched back to his cockpit when a shadow appeared in the fog. He watched as one monohull skidded past him on her beam ends. Then, another boat flew by. In the turmoil of bombarding wind and water, it took a while before Van Cleve realized his boat was also was sliding backwards. The 150 mph assault caused Kalokalo to drag her mooring and anchor up Nakama Creek. He had to think fast how to stop his boat. "There was no visibility and my boat felt like it was flying," he says.

To save Kalokalo, Van Cleve wrestled his stern anchor and crawled its line forward. In the teeth of the massive cyclone, he deployed his second anchor and let out more chain. After completing four trips to the bow and back while the weather pounded his body, he gave in. "I finally collapsed in the cockpit after I'd deployed the second anchor and decided I couldn't do anything more to save my boat." Exhausted, Van Cleve mentally prepared to go aground. "I knew I was close to shore," he says.

But, by late afternoon Kalokalo finally held her ground. Van Cleve estimated he was only 10 feet from land. It wasn't until the next morning that his perspective of his close call truly came to light. His transom bobbed quietly, only a stone's throw from a shoreline carpeted with sharp rocks. And, flanking his starboard side, wrecked sail boats heaped in a pile like a mound of washed-up carcasses. It was a sobering moment for Van Cleve. 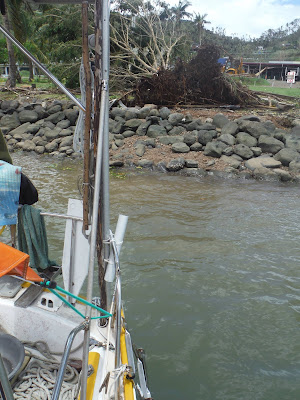 In total, 23 sailboats went aground in Savusavu and many others incurred severe damage. The cyclonic winds were so strong the storm's ferocity even stripped the paint off several boats. After conducting a full inspection of Kalokalo, Van Cleve discovered the only damage to his boat was a broken stanchion penetrating its hull.

"I'm a very lucky person in a strong, lucky boat," he wrote his friends days later when cell service and power was restored in Savusavu. Jim Van Cleve didn't anticipate Tropical Cyclone Winston's severity. But, he says his "thorough pre-storm prep, good seamanship and having a strong boat" is what made the difference.
Posted by hotspur at 9:01 AM 1 comment: