How do I start up again after months of silence? And why so quiet?

I can't explain the frustration of not knowing what to do or where to go. Like rusty robots on low batteries, Jim and I bumped around aimlessly every day trying to figure out what the next step was in our life... and usually we were headed in opposite directions. Where do we go and what is best for the family?? What aren't our options?
With our man-child closer to manhood than the other direction, we feel we need to be in a position so that he can be on his own eventually, earn some money of his own in the meantime and have options of his own so that he can find his own path in life. This has created a huge bump in our cruising plans. More like mountain, really, than a bump. Huge. But we knew it was coming and we want to do the right thing for Tim and for everyone else.

And as Tim is growing older, he does what most male children do - he tests his power as a man, his awesome authority, his immense knowledge, his testosterone-bound leadership qualities. So, instead of just having a bossy husband to contend with I am now held captive aboard a boat with two men exerting manliness in the form of 'captain'. Sucks to be me. 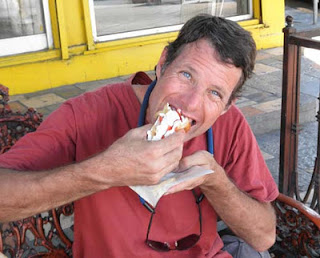 All our energy was put into what to do next. The anxiety was tremendous and nothing "felt" right. To make things even more disgusting, every time we formed a plan of any kind, a wrench... or two... or three... were hurled in our direction causing the type of mayhem similar to frantic chickens running around without heads, creating a bloody mess. There were many tears. At one point I thought that maybe my marriage was over. It was horrible and it lasted for months... this is after spending the worst summer ever in the boiling heat of Mazatlan. If I sound negative I assure you... it felt even worse.
There were happy times in between, though. We left Mazatlan November 1st and crossed to the Baja. We reunited with friends everywhere we went. Thanksgiving was spent in beautiful Puerto Escondido where the kids met more cruising kids and we reunited with more friends. Eventually we ended up in our all time favorite, Santa Rosalia. When we caught a weather window, we sailed across to the mainland and hauled Hotspur out in Guaymas, Mexico before Christmas. Did I mention that this time of year the northers are howling and the correct direction to sail would be south? And we were headed north?
We actually had a reason for going the wrong direction, but remember those wrenches I mentioned? Yes, well - more of those were hurled our way. Long story short, we spent a lovely Christmas with Jim's dad in Arizona and then took a road trip across Arizona, New Mexico and Texas. We were trying to determine where we could end up so that Tim can possibly graduate from his final year in high school and we can fill the cruising kitty, which is now barely bare-bones.

Thankfully, we have a plan - one that every single member on board is excited about!

HINT:
I will say that we are unloading things off the boat that we won't need in the next 6 months. We will use the car as a temporary storage facility. We are also getting ready to paint the hull with anti-fouling paint... which means that we are putting Hotspur back in the water very soon. (There will be a post about why we are having to re-paint the hull ourselves since we paid to have it done professionally not too long ago AND it is under "warranty".... HA!) And I will tell you that we are going the direction the wind is blowing this time.
Posted by hotspur at 8:12 AM