We have left the boat for exactly a week yesterday on a mooring in Bahia del Sol, El Salvador so that we could travel inland and see some of Guatemala. Since we have been away, two nasty storms have knocked boats off their moorings.

The first happened last Tuesday - we received an email saying that Hotspur had broken off and dragged into the estuary. I about had a coronary when I got the email! 15 minutes later, we received another email saying it was a mistake. It was not Hotspur, it was our friends on Taking Flight, who are also traveling in Guatemala right now. Good news is that she landed in the muck and not the rocks, so no damage. With the help of lovely cruisers, Taking Flight was pulled off at high tide and re-moored.

But, my coronary returned yesterday morning when I received these photos of Hotspur and news that after another bad storm, several boats broke free - and although Hotspur hung on tightly to her mooring, she was hit by another boat that did not!


And if you think this looks bad, one J-Boat, Tolerance, drug anchor and hit some concrete pylons. The boat is a loss. Many other boats sustained damage and as of today we don't know who or how much. Luckily for Hotspur, the damage looks cosmetic. But now one of us needs to go back and get repairs started before hurricane season is upon us. Who knows how long it will take - many boats need repairs made.

The crew on Hotspur left Panajachel and arrived in Antigua last Wednesday. We rented a guesthouse for a month. We start Spanish classes this morning and have paid for 2 weeks of lessons for the everyone. Since I am the strongest Spanish speaker in the family, looks like I'll be catching a bus back to El Salvador and leaving Jim and the kids to finish their lessons. That's what we're thinking today, anyway.

I have said before that traveling with pets is a blessing and a curse. And when you want to travel inland, it is only a curse. Many cruisers we have spoken with who have pets have agreed that as much as we love them, they are a hindrance to our traveling. You can’t take them on the buses, you can’t leave them alone on the boat for long, you can’t guarantee that you’ll find someone to babysit or that your pet won’t rebel at being left and chew up or pee on something valuable belonging to the babysitter. It is a difficult challenge.
To our great fortune, we found a permanent home for Bad Kitty. A lovely woman on one of the islands agreed to take Bad Kitty, hoping that eventually that the cat will be sleeping in bed with her and her dogs. I don’t know about that one, but I truly think Bad Kitty will be much happier as a land cat – pouncing on unsuspecting locusts and wrestling the greatest of grasshoppers.

And our timing couldn’t have been better. A van heading to Guatemala with 7 of our cruising friends aboard had room for 4 more. For $100 (including tip), we found transport to Panajachel, Guatemala for all 4 of us straight from Bahia del Sol.
It took about 7 hours, good roads and easy border crossing. No extra costs since El Salvador, Guatemala, Honduras and Nicaragua share the same Visa-free land travel. It is different if you are travelling by sea.

Panajachel’s climate was so much cooler than in Bahia del Sol. It rained frequently, but not all day. Unfortunately, that also meant cloud coverage – not great for photos. But the vibrant colors of the souvenirs bursted through the images anyway: bags, jewelry, hats, wooden sculptures, woven baby booties, huipils and smiling people.
We found El Amigo Hotel– small, clean, private bath and 3 doubles for $24US (yes, we negotiated). Breakfasts nearby are very affordable - $3US including coffee. We found the vendors to be easily talked down from their original price of items. I bought a gorgeous hand woven table runner for $11US - gorgeous! The bidding began at 250Q ($33US). We negotiated a tour of the 3 pueblos across the lake for 300Q ($40US) and got to spend time in each for 1 1/2 hours each... Santiago, San Pedro and San Juan.
All the lake towns we visited were very touristy - lots of Europeans and North Americans come to study Spanish and laze away the days all the while enjoying the beautiful views of the 3 surrounding volcanoes. 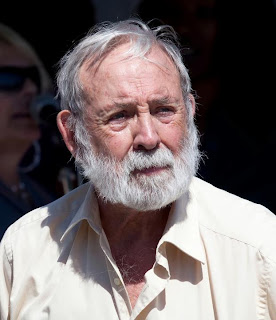 Here is a very nice tribute to Don Andesrson, fellow cruiser & weather guru. I wanted to write one of my own, but I think Laura’s sums it up. I also was a net Controller for Summer Passage weather back when we had Windfall in 2009 and 2010. I had so hoped to get back in the swing of things when we finally replaced our SSB/HAM we have on Hotspur, but Don took a sabbatical soon after. There is nothing – and I mean nothing – that makes you feel more secure as a cruiser than talking with a person who has a true grasp of the weather patterns. Don wasn’t perfect, but he had a gift for understanding weather. A real gift. And he was a character, which made us adore him all the more. I will sure miss him and we Hotspurvians sure do appreciate him. Don, thank you and fair winds!
What Laura has to say about Don (and ditto!) on Just A Minute:
http://svjustaminute.blogspot.com/2012/04/tribute-to-don-anderson.html
Posted by hotspur at 6:07 PM No comments:

Lagoon 380 Catamaran For Sale By Owner

Our friends on Just A Minute have recently put their catamaran for sale in La Paz as their cruising life comes to an end and a new adventure on land waits for their arrival. If you are looking for an awesome, cruiser-ready catamaran priced extremely well and located on the West Coast, check out their post:
http://lagoon380forsale.blogspot.com/
Posted by hotspur at 11:58 AM 2 comments:

Anyone who has spent any time in Mexico and especially over Easter knows that it is saner to stay inside than to venture outdoors in the crowds. Loud music, parties until daybreak, whole families and crazy drunk party animals play for 10 days preceding Easter Sunday.
It is the same in El Salvador. The beaches are littered with people, the streets are lined with stacking traffic and the bays and estuaries are teeming with jet skiers and motorboats – driving fast and furious – every day a little closer to your sailboat anchored out. It is rumored that yesterday speeding tickets were generously handed out to obnoxious jet ski drivers too close to the marina. $200 a pop – ouch!
The hotel is full and the swimming pools and restaurants are busy. We heard the wait to catch a bus to Zacatecalouca was 3 hours long yesterday. The weather gets a little hotter everyday and the humidity gets a little higher bit by bit.
Jim and I decided early last week that we weren’t going anywhere until Easter Sunday had passed us by. As much as we are itching to travel inland and take some Spanish immersion classes, hike volcanoes, enjoy cooler weather in mountain towns… we made the choice to hunker down, low-key, hang out and do a few boat projects until the madness is over. Stainless needs cleaning/polishing, oven needs scrubbing, bug screens need washing and repairs made, shade cloth needed design tweaking, etc...
As Easter is upon us today, we expect to make plans early this upcoming week to put Hotspur on a mooring and head towards Guatemala via bus. This means major work to be done to prepare the boat for rain and humidity. We do not want to come back to a boat disguised as a petri dish, green and moldy.

So, we had a deviled egg competition on Easter Sunday. Afterwards, we ate the contestants. Some of the entries were really good! But Jim said mine were the best! Truly, there were some very good ones! 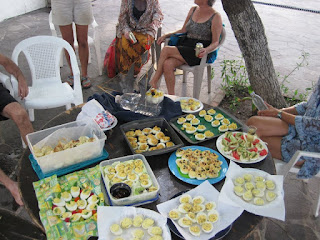 What To Do in Bahia del Sol When You’re Not By the Pool? 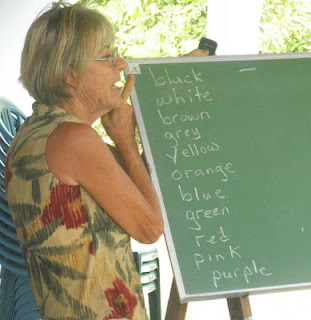 Jan is a former cruiser and Canadian who now resides on one of the islands across from Bahia del Sol, El Salvador. She purchased her property in 2004. It was just 3 acres of wild, tropical land. It took her 5 weeks and 5 men helping with machetes to clear a space for her house, but today it is a school for the local kids to learn English. And, for the cruiser kids and adults to learn Spanish! 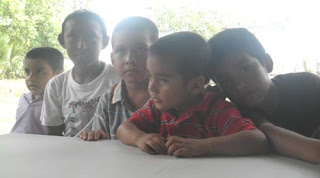 Every Monday and Thursday she has a group of El Salvadoran children come to her home for lessons after school. These kids are so sweet, many of them terribly shy. But after a few visits with them, they climb out of their shells. Jan asks the cruisers to come visit so that the kids get practice.
Jan has come up with games to help the kids reach out a bit more. Passing a ball in a circle – the tosser says a word CATORCE! – and the catcher repeats the word in English FOURTEEN! The tosser says BLUE! - and the catcher replies AZUL! The tosser yells QUIEN! - and the catcher must say WHO!
Or Jan has a list of colors. The list of colors in Spanish is given to the English speakers and the list in English to the Spanish speakers. Groups are formed and then each group ventures off onto the 3 acres to write down anything and everything they find in those colors.
VERDE - GREEN
Grama – Grass
Hoja – leaf
Llina – Flipflops
Guineo – Banana (it was unripe and still on the tree)
ORANGE – NARANJADO
Shirt – Camisa
Mango – Mango
Bird – Ave
Flower - Flor
Yesterday, Carolyne and I were the only ones to show up and with only three El Salvadoran girls to show, it was a perfect fit. For 3 hours we practiced our Spanish and helped the girls with their English. I brought quesadilla, a type of cheese cake made here in El Salvador and we shared in the snack.

The class erupted into a water fight when Jan introduced water balloons! The girls played until sundown, giggling and running and soaking wet. And all the girls wanted to get together again today – for the fun of it.
If you want your kid to learn another language, this is the way to do it! 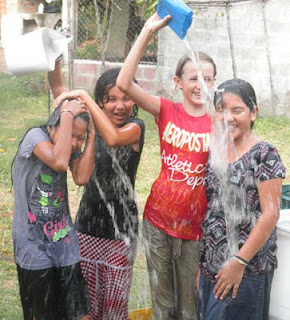 Jan hosts a chicken dinner each Wednesday night. It costs $10 per plate and the proceeds go to her school. Next week she wants to take the kids to San Salvador to the Children’s Museum, Tin Marin.
Posted by hotspur at 9:44 AM No comments: