Bringing in the New Year with 50+ Knots

Happy New Year! But if what we experienced New Year's Eve is foreshadowing 2016, we'd better grow a thicker skin. 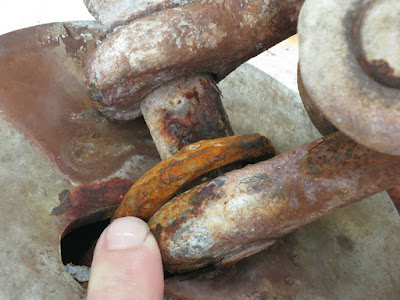 We did what we almost always do New Year's Eve. I was in bed by 10pm. There were several parties in town, but the 3 of us didn't feel like going out. The forecast had predicted rain and gallivanting about in wet weather was as good excuse as any to be recluse. In fairness, our solitary New Year's was planned a few days in advance.

We celebrated the day before New Year's Eve at The Captain's Table restaurant, where the poor waitress returned to tell us they were out of the New Zealand mussels we ordered, and would I like to wait until the lettuce was delivered to the restaurant for my Caesar Salad. No, I wouldn't. When my entree arrived, the Thai Chicken I ordered came as Thai Fish. Normally I would have said, "Hey, I didn't order this," but it was very clear to me that I could change the progression of the evening by just ordering another glass of wine. So, I ordered two glasses.

New Year's Eve aboard Hotspur was quiet- and then it wasn't. I was asleep when the wind kicked up nasty. I got up because Jim and Carolyne were scurrying around. The boat was shaking and shuddering. We clocked 40 knots on the anemometer. No biggie - we've seen that before. But many cruisers were off their boats at parties. There was no mention of a storm coming. Many cruisers were stranded on land unable to get back to their vessels.
By 11:30 it was worse. Gusts over 50 knots were punching us. We couldn't see in front of the boat because of the pelting rain shooting sideways like spears. The boat moored to our port side called HERITAGE disappeared slowly up the creek. She was dragging her mooring. Friends of ours from Austria were on the radio and had broken free of their mooring and were tangled with another boat. We were too far away to assist them and our 2HP outboard was too wimpy for the weather.

Jim put on his dive mask and went to the bow to drop our anchor as extra weight just in case we broke free and we had our engine running. At midnight, Jim and I were in the cockpit with the radar on to see if any loose boats were coming our way. The dinghy we'd raised was flailing and Carolyne went to the stern to secure it. It was mayhem. Just then, Copra Shed sent off a slew of fireworks in celebration of the New Year. Jim said, "You've got to be *^%%^# kidding me?" 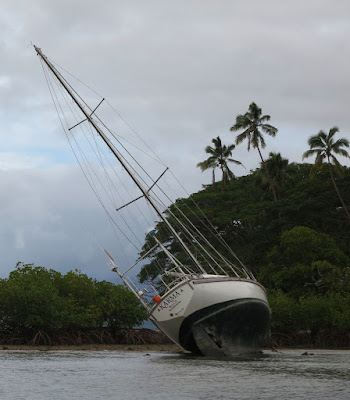 I woke up NYD with a monster sinus infection and fever. One boat ran aground on the reef and is still there this morning. I don't know the damage and the owner isn't here. Another boat left his sails up and left Fiji and his jib shredded to ribbons. HERITAGE had wandered up the creek and our friends on SHEHERAZAD had to fend her off their boat all night.