Boat Projects While We Wait

YEA!
The new coupler arrived day before yesterday. It was supposed to be here Wednesday morning. But this is Mexico and Jim and I have learned not to hold our breath... ever. The part was beautiful... it looks like we might get to leave La Cruz early next week!
YEA!
Jim noticed that the holes to hold the coupler onto the shaft were absolutely incorrect.
BOO!
The coupler went back for modifications, but we got it back the next morning...
YEA!
When we received it again, there was another problem... the coupler didn't match the CAD diagram that Evan so sweetly made up for us.
BOO!
The coupler must go back and be re-built from scratch... start all over again.
BOO-HOO! 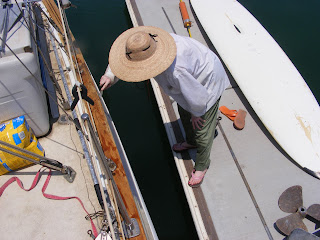 Meanwhile, as days have turned into weeks, I have taken on the fun task of scraping the varnish off the toe rails. I typically don't do outdoor boat projects. Because I have to cover up from head to toe to protect my fairer than fair complexion from the sun, outside work can get awfully uncomfortable and sweaty. But I have put this project off for a year and it is my contribution to headache jobs while Jim is doing engineer/mechanical-type headache jobs.

The prep work is the worst! I used a heat gun and scraper to remove the old varnish... it has taken two weeks. Slow; painful. The heat gun died one afternoon mid-scrape, so I had to go begging. Ethan on Eyoni came to my rescue and I only hope that I can return his heat gun in working condition.

Bleaching the teak on the toe rail became the next struggle... oxalic acid is nowhere to be found... not at Comex, Home Depot, the little hardware store, the pool store... nowhere.  So, I used toilet bowl cleaner. Did the trick. I use it to clean the rust off my stainless, too. It's hydrochloric acid (same as muriatic acid). It works wonders and doesn't eat through the fiberglass... right away. It dissolves rust stains without a lot of muscle and since we are in a slip, I use plenty of fresh water to rinse. 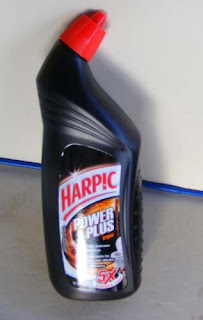 Who says that the bobbypin is the most versatile tool? On my boat, it's my trusty toilet bowl cleaner... which, by the way, I would never put in my head because it might eat away the hoses and clamps. (That translates to Blub-Blub-Blub!) I love my toilet bowl cleaner so much that I gave a bottle to 13 y/o Josh on Evergreen as a going-away gift. (He was bemoaning his passage chore of cleaning all the stainless on deck.) Who says I don't know the first thing about teenagers?
Posted by hotspur at 7:12 AM