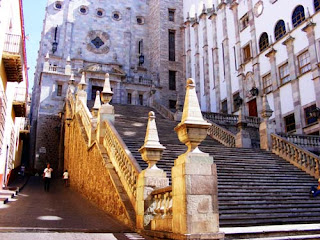 Taking a bus from Puerto Vallarta to Guanajuato is super easy (a 10 hour ride)... unless you zone out and miss the bus while sitting only 50' away from it as it pulls out of the Central Camionera (bus station). That would be me. After boo-hooing to the ticket agent it was decided that I would take the bus to Leon (an hour from Guanajuato) and purchase a separate ticket to Guanajuato.
Roundtrip bus ticket with 20% discount: $100US
One way from Leon: $4US 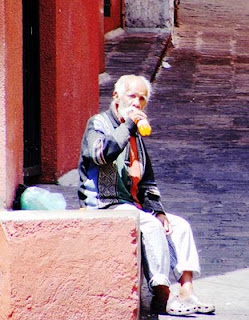 I arrived at 6am on Saturday and waited in the station for the sun to rise. This actually worked out better for me because my original arrival time on the earlier bus would have been midnight. I had no hotel reservations. Hey, I'm a cruiser and I live in Mexico. I can wing it. Plus, I did have the Lonely Planet Guide to Mexico with me.
The taxi ride downtown was $3.50US

I made my way to breakfast first at Truko 7, a funky little cafe with some of the best coffee I've ever had in my life. Next, Mummy Museum. Finally... a place to sleep. I found Casa Bertha (#1 on Lonely Planet's Budget Hotel section), what I believe to be closer to a boarding house because it has private rooms and bathrooms... not dormitory style like some hostels. A community kitchen with fridge, stove, dishes and roof-top terrace that offers spectacular views of the city is a plus. I slept for several hours before making my way downtown for the evening. A bowl of pesole and a lemonada kept me going until 10pm when I went back to my room for the night.
Two nights at Casa Bertha:  $34.50US
Food: $9.50US
Museum: $1.50US
Internet Cafe: $.75US 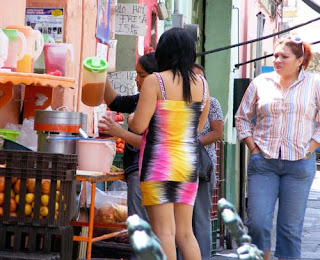 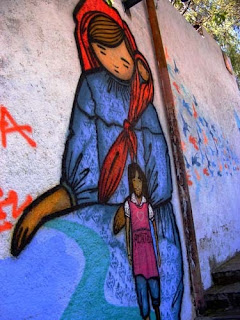 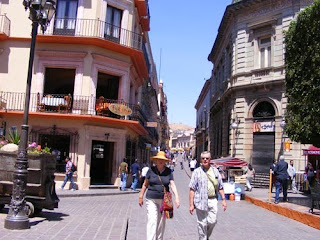 Monday, my last day in Guanajuato, I spent walking the narrow streets. I rode the Funicular to the rim of the city at the statue of Pipila, a hero during the Mexican War of Independence. The view from the rim is spectacular and the walk down the narrow steps is invigorating. I browsed the numerous shop fronts in town and bought gifts for the kids. I found a place to get my hair cut. I bought a pair of Mexican leather sandals as a token of my pilgrimage. I had Aztec soup for dinner and was joined by a delightful local, Victoria. She joined me at my table and we spoke in Spanish for three hours until her teens arrived and she had to go home. She is hosting an exchange student from Oregon. Her company made my awesome day excellent. At 9pm, I took a cab to the bus station... my bus was scheduled to depart at 11pm for Puerto Vallarta... and I made sure I was on the bus this time.
Tourism: $2US
Haircut/Tip: $6US
Food: $10.45US
Sandals: $12US
Gifts: $10.50US
Taxi: $3.50US
Internet Cafe: $.80US