Mazatlan Must be a Magnet 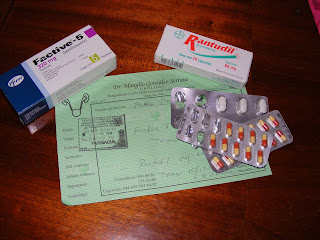 We were 60 miles out of Mazatlan heading to Escondido for Loretofest when Jim became ill. Not sea sickness... he never gets sea sick. We debated less than a minute whether to continue or to turn around. A no-brainer... Mazatlan has multiple medical options and Escondido... doesn't. So, we turned around.

We arrived back in the Old Harbor at 4am Monday morning. The Harbor Master gave us permission to enter and we hastily dropped anchor before dropping off into restless sleep. At 9am Jim and I ventured into the city to find a Urologist. We were given a referral by a fellow cruiser of a doc who spoke English. Unfortunately, he was still celebrating Semana Santa (Easter Week) and had not returned to the office. So, we were given a name of a Spanish speaking doctor and we took our chances.

My Spanish is improving daily, although medical terms are difficult for me in English and those terms in Spanish are a total crap-shoot. It turns out that Jim has a bacterial infection and needs major doses of antibiotics and an anti-inflammatory. The cost of the doctor and meds set us back about $150 USD. Jim was given strict instruction to rest... no walking, exercising, lifting, etc... It looks like our decision to turn back was a wise one.

Regardless of the cost, the fact that we can walk into an office without an appointment and get seen within minutes is priceless. The consultation and exam was 500 pesos... $44USD. Antibiotics used to be over the counter in Mexico but because so many Mexicans used antibiotics for anything and became immune to the antibiotics when serious infections attacked, the Mexican government decided that only doctors should prescribe the antibiotic. So as of late last year, you now need a prescription.

Anyway, to those friends who are expecting us at Loretofest this year, we sadly will not be there. However, Jim immediately showed improvement after a day on the meds. Looks like he will live. We will stay in Maz until we are sure that Jim is cured. Worst case scenario, Jim will need surgery.
Posted by hotspur at 9:31 AM